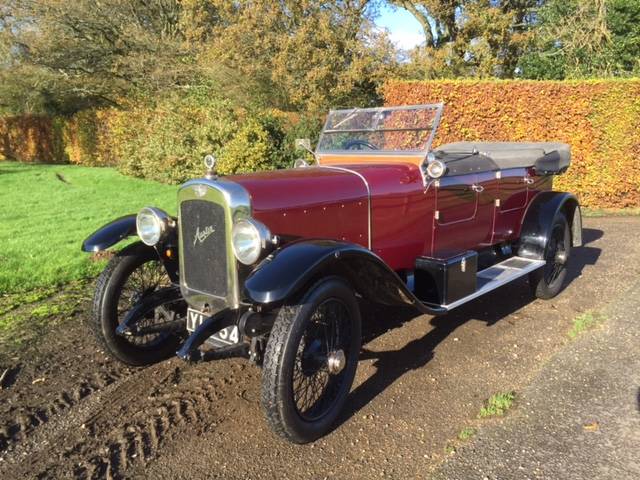 Following The Armistice, as motor car production slowly got back into its stride, Austin was to announce a new single model policy, in the form a new 20 hp car. Owing much to contemporary American practice, due to Herbert Austin’s previous ownership of a Hudson Super Six – a car which boasted both quality and excellent performance, the new Austin was to feature a unitary engine and gearbox in a sturdy ladder chassis and was available with a variety of styles of coachwork, including Tourer, saloon, Landaulette and commercial variants.

The 3.6 litre 4 cylinder engine was to prove utterly reliable and was to prove its mettle in the competition cars being entered by the Factory with Herbert Austin’s son in law, Captain Arthur Waite at the wheel. By 1921, a genuine Sports Model Tourer was introduced, on the strength of Waite’s competition successes. This new model was to feature a high lift camshaft, Claudel Hobson carburettor in place of the Zenith used on standard models. Stronger valve springs were also fitted and a higher rear axle ratio was specified, along with the fitment of wire wheels. In keeping with a growing trend on sporting motor cars at that time, a raked windscreen was to feature.

A new 20hp Sports Model was to make its debut in competition at the Brooklands Easter Meeting in 1921, driven by Felix Scriven – the car was to attain a speed of 75mph, gaining first place with an average speed of 69mph. Later, another Sports 20 was to average 83mph during the 100 mph Short Handicap race.

During a two year production period, just 23 Sports Models were built, as larger cars were somewhat out of step with the prevailing economic climate and it was only the introduction of the 12hp model in 1921 and the following year’s appearance of the Austin 7, that were to put the Company on a secure footing for the coming years.

One of just two surviving genuine Sports 20 hp models, this fine Tourer was originally exported to New Zealand for the erstwhile Prime Minister, Sir Joseph Ward, remaining for some years in his ownership. Many years later it was found by well-known Austin enthusiast, Ross Haines, who was to undertake a thorough restoration, with originality being maintained exactly. The car was purchased by another well known Austin admirer in the mid 1980’s and used sparingly for some years before being sold to an engineer who rebuilt the engine and carried out extensive work to bring the car to a very high standard. The car was then re-purchased by the previous owner who had the wheels rebuilt and fitted with the correct beaded edge tyres. The heated inlet manifold was found to be corroded, so another was fabricated.

During the past few years, the car has been sparingly used, but has proved itself to be a first class long distance tourer, capable of cruising comfortably at 60 mph, the rev counter showing just 2000 rpm at this speed thanks to the 3.6:1 rear axle ratio.

A very special and exceedingly rare high quality sporting Vintage tourer with good provenance, this vehicle must have considerable appeal for those seeking a motor car suited to long distance events, where maintaining a realistic speed is a necessity. The car is presented in excellent order all round, with good weather equipment, including an Auster screen for rear passengers. A substantial amount of documentation is included.