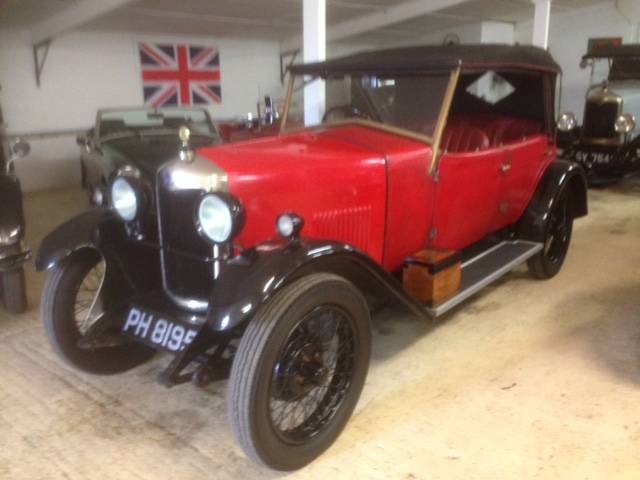 One of the earliest surviving Riley Nine Tourers, this car would appear to be the sole remaining example of the ‘Sports Four’ on the Mk 1 chassis – a twin carburettor version, one of which was tested by the motoring press of the time – achieved an astonishing 76 mph!

The ‘Sports Four’ was announced late in 1927 and offered only for the following season and this particular car, chassis number 60 918, is shown in Riley’s Factory Despatch Book (held at Gaydon) as a ‘4 Seater Sports’, ordered on 8th November 1927 and delivered to their London depot on 19th March 1928. First registered in Surrey some four days later, the car was supplied to its first owner by Rice and Harper, Motor Engineers of Guildford, whose brass plate is still affixed to the dashboard.

Presented in remarkably original condition, the car is sound and correct, with a most pleasing patina and retains all the early features of the first 9 hp models.

The engine, which is fitted with twin SU carburettors, has undergone major work within the last few thousand miles, including machining the camshafts to Sprite profile. Still retaining the original Surrey registration number, this historically interesting Riley is supplied with a large file of paperwork which shows details of much work undertaken over a number of years, along with maintenance notes, some Riley literature and the correct Driver’s Handbook. With their light fabric coachwork these Vintage Nine Tourers are lively, responsive and highly enjoyable to drive!