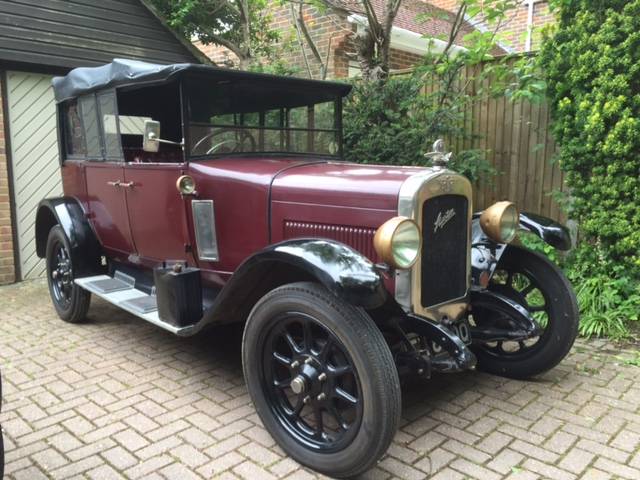 One of just two examples of the Colonial model 12/4 Tourer known the the Vintage Austin Register, this car has had only two owners in the past 50 years and has a most fascinating history.

Purchased new by the British Government in 1929, it was subsequently exported to a destination unknown. It was eventually registered in Guernsey after the war and the re-registered in Reading in May 1950, as FRX 447. In 1977, its then owner, a Mr Graham Brown, re-registered it with a far more in keeping number – TX 8000, which remains today.

The ‘Colonial’ model differed from the standard models in a variety of ways, the most obvious being the higher suspension making the car more suitable for poor road conditions. Larger scuttle vents allowed more air into the car and a glass bowl filter was fitted in the fuel ine to the Autovac.

In the file there are details of a trip undertaken when the car was in the hands of Captain Rex Tapley, when he and his wife took the car to Canada and competed in the ‘Rally of Yesteryear’. This involved driving from New York to Montreal for the start of the Rally. They then drove to Toronto and on to Michigan, finishing at Dearbourne – a trip of some 3000 miles!

A copy of ‘Worldwide’ the Austin house magazine, from 1964 is included showing a photo of the car with Captain Tapley and a description of the event. Captain Tapley was, as many will know – Secretary of the Bean Car Club and a dating certificate was provided by the Club for the car in 1966, this being on file.

Since being with the present owner for the past 22 years, the car has seen very sparing use as it was residing in Brussels for some time. When the owner returned to the UK with the car in 2013, it was re-comissioned by a local vintage car specialist and bills are supplied.

In sound order with good weather equipment and displaying a charming patina, this characterful Vintage Austin has much appeal and presence.