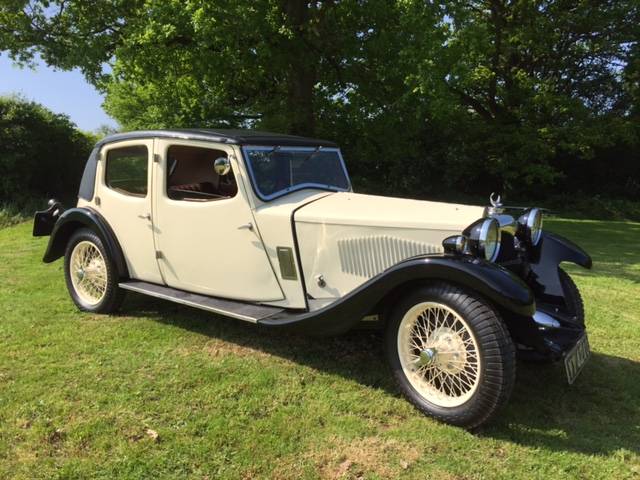 One of the most sought after Riley saloons, the 6 cylinder Kestrel models have a special appeal to enthusiasts. The destruction of so many saloons
over the years by special builders, has considerably lessened the number of survivors.

The Kestrel design was particularly advanced when it was first seen in late 1932. The nascent years of motor car streamlining produced a variety of styles, but the Kestrel was not only one of the very first, it was also one of the most stylish and attractive, in keeping with prevailing ‘Art Deco’ trends in the automotive world.

An early example of the Kestrel, powered by a ‘Special Series’ triple carburettor version of the 6/12 engine, this fine looking car was the subject of extensive restoration which was completed ten years ago. Since then, the car spent a number of years in storage and only around 500 miles
have subsequently been covered.

The car has in the past been in the hands of several well known Riley enthusiasts, including the late Gerry Dick for a number of years.

Very smartly presented in a period colour scheme of cream and black, the interior is trimmed in tan hide with matching carpets.

A rare opportunity to acquire a very early example of this desirable sporting saloon, it is offered with its original Instruction Book and copies
of previous registration books.

The original registration number remains and the plaque on the dashboard shows the car to have been supplied new by Leedhams Ltd, of Lendal Bridge,
York and first registered on 31st March 1933.