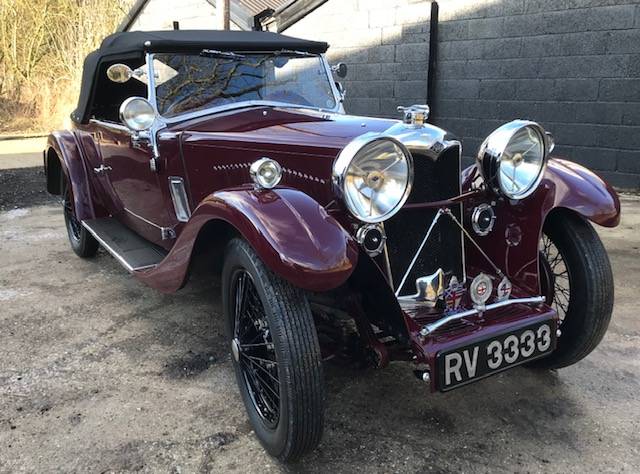 One of the prettiest small sporting Tourers of the 1930s was the Riley 9 Lynx - the earliest being arguably the most attractive with the two door coachwork with fully disappearing hood.  This model ran from late 1932 until September 1933.

It is rare to find an example of this model that has extensive and documented history, however, this particular Lynx has precisely that.  Purchased new by a solicitor from Havant in Hampshire, he collected the car from the Works at Coventry having specified a number of special features.  These included 11 inch diameter Rotax headlamps, a one-off dashboard which included a rev counter.  Quick release radiator and fuel caps and the Special Series twin carburettor engine was also chosen.

The car was to remain in the first owners hands until 1956 and he enjoyed it over the years and participated in several reliability trials and rallies during the 1930s.   At some point, later during the 1930s the original 'cut-away' doors  were converted to the flat top style, which a handful of other Lynxs also featured at this time.

During 1991 the car was acquired by a former owner at which point, sadly, it had deteriorated and was literally a 'barn discovery' in dire need of saving.   During1996 a most meticulous restoration was embarked upon supported by numerous invoices and photographs showing the rebuild process from the bare chassis with much work being undertaken by marque specialist - Blue Diamond - under the direction of Ian Gladstone.  Additional work was undertaken by renowned restorer John Foy and the engine was rebuilt and balanced by Hamblin Engineering and fitted with camshafts to Sprite profile along with a Brooklands inlet and tubular exhaust manifolds.

This fastidious restoration was completed early in 2015 and invoices on file total in excess of £100,000.

Having had considerable experience of Rileys over many years - we consider this Lynx to be the very best example of its type in existance and it must therefore represent an extremely rare and special opportunity for a connoisseur of this highly regarded marque.  It won a concours award at The Riley Register Coventry Rally in 2017.

Two vast files of documentation, manuals and photographs - some of which date back to the 1930s - are supplied.  An earlier Buff Log Book RF60 is also included.

Further photographs  and a video will be uploaded shortly.