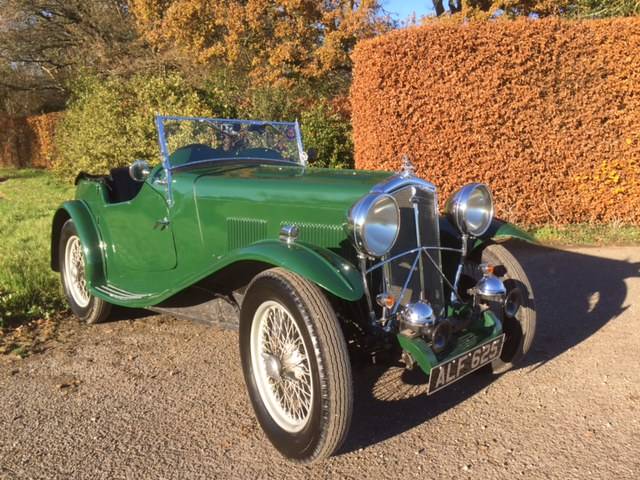 Of the numerous styles of coachwork that were available on the Wolseley Hornet Special chassis, without a doubt, one of the most attractive was the purposeful ‘Daytona Special’ 2 seater, offered by Eustace Watkins, the London Main Agent for Wolseley cars. At £275 this represented very good value for a 6 cylinder 2 seater sports car with excellent performance allied to good fuel economy.

Smartly finished in British Racing Green and affectionately known as ‘Alfie’ due to its distinctive London registration number, this 1933 example apparently spent almost 30 years laid up, before undergoing considerable refurbishment and returning to the road during 1997. There is an article detailing this in the Autumn edition of the Wolseley Hornet Special Club magazine – a copy of this article being included in the file of paperwork.

Offered on behalf of its owner from Cornwall, the car has just recently benefited from a new camshaft, the carburettors being rebuilt and a new fuel pump installed. The fuel tank is also new. The tyres have been renewed and a modern oil filter conversion fitted. Various electrical components have also been replaced and the car is in good all round order. An RF60 green logbook dating back to the 1960s is included, as is a Driver’s Handbook and a number of bills etc.