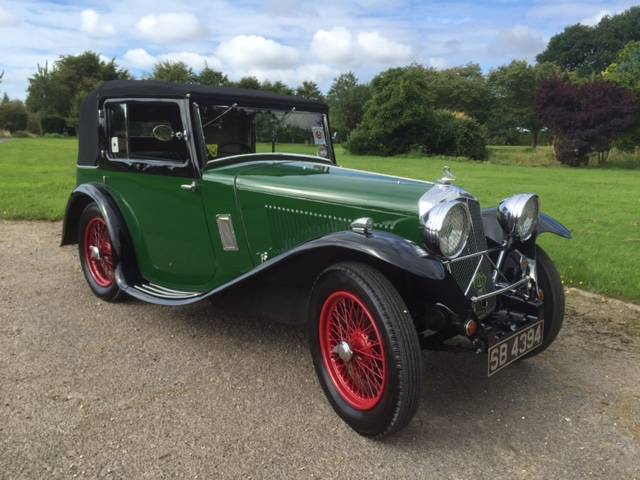 One of just two examples of the Hornet Special with this coachwork, this motor car was discovered in a derelict condition in a Cornish barn in 1990 and was reported in ’The Automobile’ magazine’s ‘Finds and Discoveries’ column

Following extraction from the barn, the car was to undergo a total restoration to the highest standard at a cost well in excess of £40,000, this being completed in 1999 and it was subsequently featured in the January

2000 issue of ‘The Automobile’, a copy of which is included in the copious file of paperwork that accompanies the car.

Some significant concours successes were to follow, and today, this delightful Wolseley remains in first class order.

The car has had much care lavished upon it in recent years, with maintenance carried out by Jim Stokes’ Workshop, including engine top end overhaul, rear axle rebuild, re-spoked wheels and new tyres and tubes.

The 1934 version of the Hornet Special chassis was considerably revised from earlier models and featured larger (12”) brakes and a 3” increase in track, which improved both stability and steering lock. A free-flow exhaust system and twin SU carburettors equated to a 45bhp power output which ensured this

1.3 litre 6 cylinder car was amongst the liveliest in its class.

The Drophead Coupe has the Tickford patent wind-down hood, which can be raised or lowered in less than 20 seconds. The hood is of high quality and fully lined, ensuring saloon car comfort when closed. All details are correct and the original Scottish registration number remains. The car is well known to the Wolseley Hornet Special Club and is always much admired wherever it is seen.