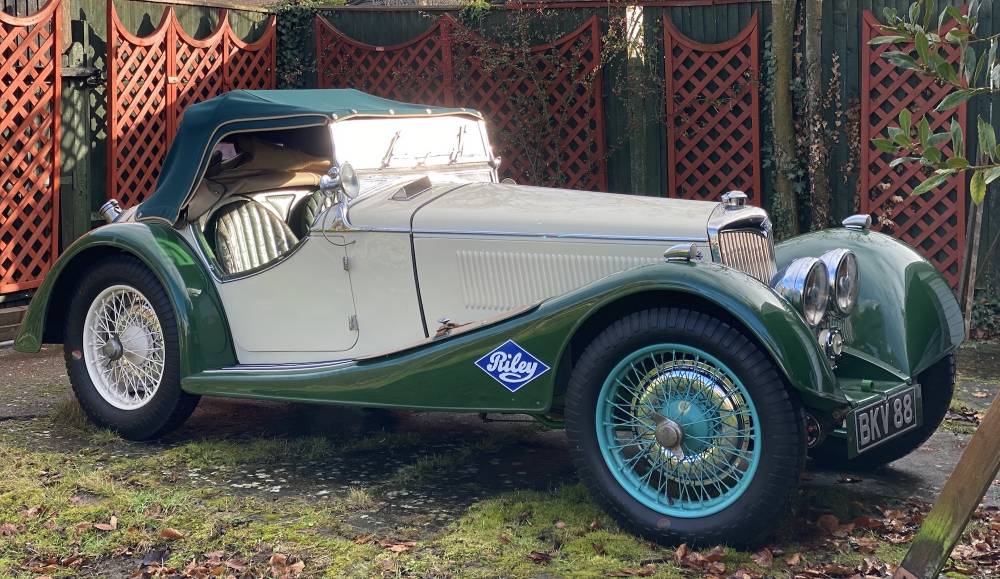 The Riley Sprite has always been a highly sought-after model - with a production run of just 55 cars, of which some 50 are known to survive.  Formidable performers in their day, famed for their sure-footed, precise handling and ability to reach 90 mph under favourable road conditions, several examples are today campaigned with great effect in historic rallying.

Riley Sprites rarely come to market and this example, with its fascinating history and 56-year single family ownership is well documented, with pre-war competition history.

This Riley Sprite (BKV 88) was registered at the Works on 7th October 1936 and was used as a ‘show car’ and Works demonstrator.  She was featured in an experimental Television programme mentioned in ‘The Autocar’ of 9th October 1936, which was broadcast on that day from Alexandra Palace in London.  This programme was arranged by The Society of Motor Manufacturers and Traders, at the request of the BBC.  In order to view the programme, which was to last 90 minutes featuring twenty famous British cars, viewers attended showings at Selfridges, Whiteleys, Waterloo Station and Marconi Headquarters, with the presenter being John Prioleau who was a well-known motoring writer of the period.

This Riley Sprite competed in the MCC Exeter Trial, on 1st/2nd January 1937, achieving a Premier award, in the hands of its first owner, Christopher Jennings and his wife-to-be, Margaret Allan. (See black and white photograph white photo by W. J. Brunell).

This Sprite also competed in the Coronation Scottish Rally and was featured in ‘The Motor’ Magazine on 25thMay 1937 and ‘Autocar’ on 28th May 1937.  She also participated in The Riley Motor Club Annual ‘24’ as reported in ‘The Light Car’ 2nd July 1937`.

Christopher Jennings was the Riley Publicity Manager and later Editor of ‘The Motor’ Magazine.  His wife’s maiden name was Allan, they married in 1937.  Margaret Jennings (nee Allan) was a leading British female race and rally driver in the interwar years and one of only 4 women to achieve a 120-mph badge at Brooklands.  During the Second World War, she worked in the intelligence de-coding centre at Bletchley Park.  After the war she became a journalist and was Vogue Magazine’s motoring correspondent from 1948-1957.

Original Works paperwork (a copy of which is included) confirms the car was sold by Riley agents, Lewes Motors of East Sussex, to her second owner, a Mr. Rye, for his daughter, apparently for her 21st Birthday present.  Delivery was on 25th October 1937, by which time the car had covered 6,900 miles.

Service history is complete through to 14th March 1939 (showing 29,750 miles were covered).  Factory records show that at 10,280 miles, the car was returned to the Riley Works at Coventry for engine work.  The engine was dismantled by the Works on 10th February 1938.  Just 4 days later, Bob Gerard (who began racing with Riley with a 9hp) purchased a Riley TT Sprite (CWK 171) to race in the 1500cc Class of the Tourist Trophy.  He subsequently also purchased Riley TT Sprite AVC 20.  It is believed that Bob Gerard specified a four-cylinder engine to be fitted to CWK 171.  It would appear, that the original four-cylinder engine from TT Sprite CWK 171 (engine number 6950) was swapped and fitted into this Riley Sprite - BKV 88.   (During this period the Works competition cars frequently underwent engine changes).  (‘Sporting Rileys The Forgotten Champions’ by David Styles – page 83 features CWK 171).

The current owner’s late father knew the second owner, Mr. Rye and his daughter and when BKV 88 came available as a private sale in 1965, the car was purchased for his son Michael Clarke, the current owner.

The vast majority of Riley Sprites were fitted with the streamlined ‘fencer’s mask’ grille, although it is understood a customer could specify the ‘traditional’ radiator without the cowling as an option. This car, in fact is offered with the choice of both.

This Riley Sprite was supplied originally in green and now sports a distinctive livery of British Racing Green and Ivory.  She retains her original green leather upholstery - something of a rarity in an open sports car.  The weather equipment was renewed at the time of the restoration and includes a tonneau cover and side screens.   The original Rexine sidescreen bag is provided along with new side screens and the original sidescreens are included in the sale.

The car also has the original fitted suitcase which remains in remarkably good condition.  The case fits into the rear compartment behind the seats.  The suitcase has a faded ‘Zurich’ label, and it is rumoured that the car was entered into the Monte Carlo Rally, but it was oversubscribed.  However, it is believed that this car regularly travelled overseas and the substantial documented mileage over the first two years of its life would appear to substantiate this.

This Riley Sprite boasts a number of unique features, including the vents on the scuttle top and also the cutaway section in the offside front wing for additional storage.  This modification is understood to have been carried before the War to allow more space for luggage when touring. When not in use it is covered by a neat fabric cover which matches the tonneau.

The car was laid up in 1978.  She subsequently underwent restoration to a very high standard by Kingham Restorations at Swanley, Kent, with the work completed in 2005.  She was duly displayed at the Riley Register Coventry Rally that year in celebration of 50 years of the Register.  Just 1,000 miles have been covered since.  She was last used in 2011 and some recommissioning will be required following this period of storage.

Many original parts (including brake drums, road wheels, steering wheel) are included. The new water pump and the inlet manifold were supplied by the late Ralph Wren.  The pre-selector gear box was rebuilt by Tom Dark, with close-ratios.  The engine has Phoenix steel rods.  (The original rods are also available, and the original pistons and camshaft).   All invoices are available for work completed along with extensive photographs and copies of Works documents.