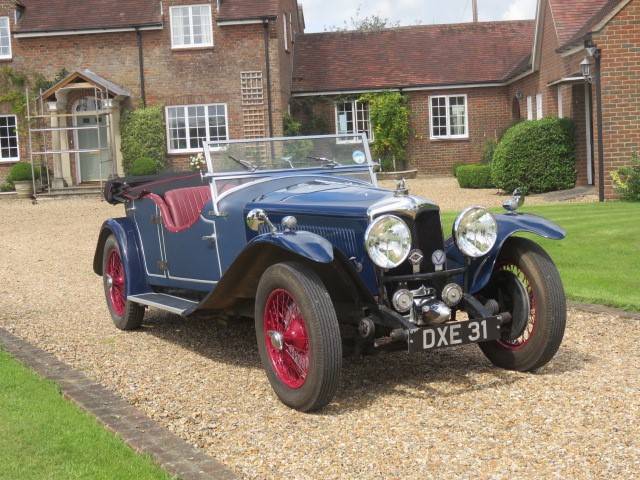 This car was originally built by Riley in 1937 as a Kestrel Saloon, and was owned in the 1950s by a Mr Thompson, a founder member of the Riley Register. By the mid-1970s the car was in poor condition and was sadly left to the elements for some 30 years until acquired by its present owner in 2008.

The car was completely stripped down to the chassis and all components rebuilt. The original body was beyond repair so a new four seater tourer body was designed of the type that a coachbuilder might have created in the early ‘30s, being of similar appearance to the fabric bodied Riley Tourers of that period. The construction is aluminium on an ash frame, with wadding and fabric over.

A 1934 12/6 radiator was employed using a new core, and suitable Andre Hertford shock absorbers were fitted to the front. A magnificent pair of Marchal headlamps complete the front of the car, producing a majestic and balanced appearance. The wings were sourced from a Riley “March Special” and are very graceful.

The 15/6 engine at 1725ccs is the last manifestation of the Percy Riley sixes and the best. This one has been tuned with the fitting of “David Newman” fast road cams, twin SU carburettors and Register pistons, and is estimated to produce about 75 – 80 bhp. The gearbox is the much liked and robust Armstrong Preselector. The final drive is much higher 4.1:1 than the original 5.2:1, giving the car a long legged feel. The steering box is a 1931 unit, more robust than the original 1937 box, endowing the car with accurate steering.

On the road the car feels stable and well balanced with excellent performance being able to hold its own in modern traffic.

The body is complete with full weather equipment including good side screens.

This motorcar has been accepted by the VSCC Eligibility Committee and is complete with a “buff” form. The original instruction book goes with the car as does a photographic record of the rebuild.

The present owner is a well known Riley Register member having been a member for 59 years, a sometime Chairman of the National Committee and Technical Director of Riley Register Spares Ltd. With increasing years he now finds it necessary to cut down on his collection prior to moving to a smaller house.

A comprehensive sheet detailing the vehicles rebuild is available on request.