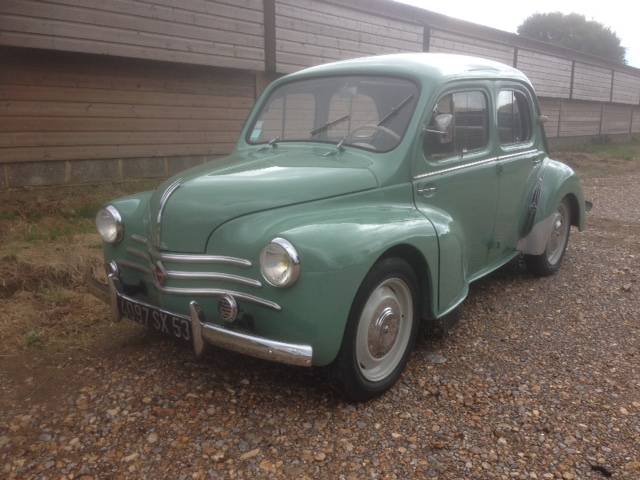 One of the most charismatic small French cars, the 4CV made its debut in1947. When launched, it was nicknamed ‘La motte de beurre’ (The lump ofbutter) due to the fact that the earliest batch were all painted in a sand yellow colour!

The 4CV – also known as the Renault 750, was to enjoy a long anddistinguished production run, being available up to 1961, despite its ultimate replacement, the Dauphine, having appeared some five years before this. Assembled in no less than seven other countries, the 4CV was notable for being the first French car to sell more than a million units, with atotal of 1,105,543 being produced.

Capable of over 40 mpg and having a maximum speed of 62 mph, the little 4CV has gained itself a cult following in recent years.

This delightful example is finished in the factory colour of Almondine and retains its original interior trim, which is in exceptional condition, in keeping with the 53,800 kms (Approximately 33,430 miles) which we are assured is correct. It has had just 2 owners and all fittings and furnishings remain in excellent condition.

Ideal transport for Goodwood Revival, this charming little car must be one of the most original survivors and is sure to cause much interest wherever it goes.