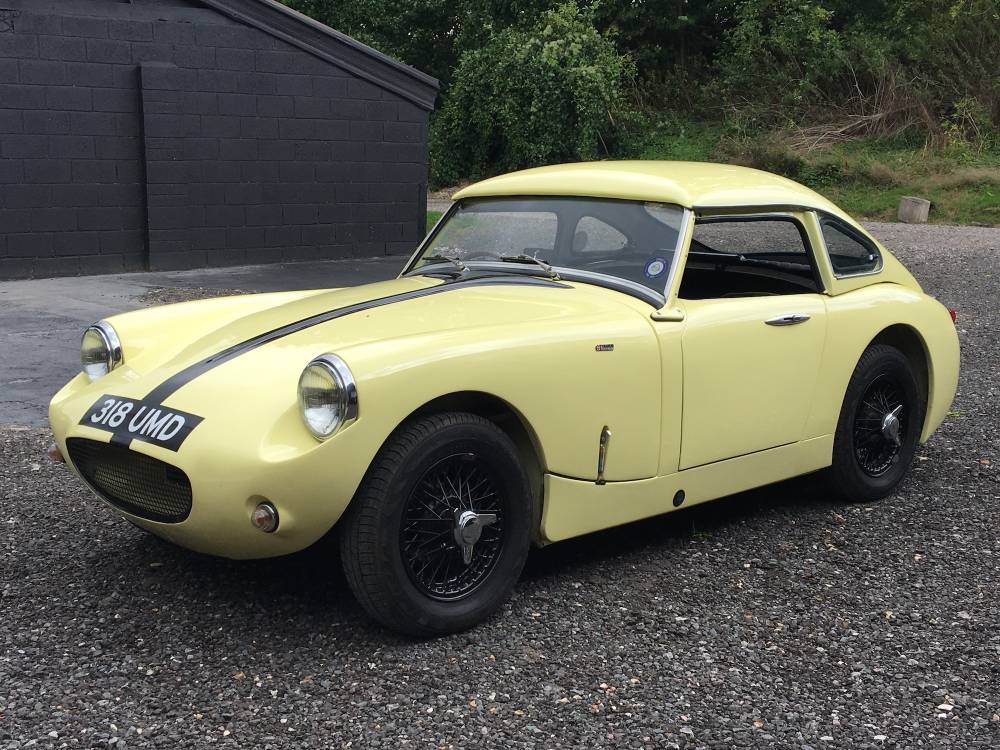 During the 1960s a number of manufacturers produced glass fibre bonnets and hardtops for those seeking to personalise their Mk1 Sprites.

Among the most popular were those from Ashley Laminates, a company which had been founded in 1955 and had already achieved fame amongst special builders by offering body shells and components for Austin 7 and Ford specials.

This car has had just two owners from new having been registered to its first lady owner on the 1st of May 1959.   Commencing life finished in Old English White with extras including heater, front bumper, laminated windscreen and Dunlop Fort tyres, the car was first registered in Middlesex.

The second chapter in this car’s life begins when it was discovered in London together with a number of abandoned Sprites and Minis in a block of lockups.  It was subsequently purchased by its second owner in September 1998 and underwent a five-year comprehensive restoration before returning to the road in 2003.

Many panels were replaced, including inner and outer sills, floor, rear bulk-head, boot floor, inner wings and footwell side panels.

In 2007 an Ashley Hardtop was acquired and fitted and the search commenced for an Ashley Bonnet – one being finally acquired in 2011.  The car was then repainted in the correct Austin-Healey colour of Primrose.  The door handles are reproduction Speedwell parts, machined from solid aluminium.

This car is featured on page 44 of the book ‘Frogeye Sprite – the complete story’ by John Baggott.

Mechanically, the car is first class having a 1330cc engine which was rebuilt in 2011 by Skiptune and fitted with their stage 2-cylinder heads.   The flywheel is a lightened billet item, there is Vernier timing gear, a ‘2.66’ camshaft and a baffled sump.  Further upgrades included an alternator, an Aldon ‘fastroad’ distributor with Ignitor electronic ignition.  The inlet and exhaust manifolds are by Maniflow as is the exhaust system.  A single SU HIF44 Carburettor with K&N filter is fitted and when set up on a rolling road recently, the engine showed 87 bhp at the flywheel.   A five-speed gear box has been fitted along with Frontline adjustable telescopic front shock absorbers.  The front springs are 1inch lowered, 340lb items and an inch and 1/16th anti-roll bar is also fitted.  Naturally, disc brakes have been fitted and the dual master cylinder is the correct ¾ bore version.

A large file of documents includes the Heritage Certificate, list of work carried out over the past 7 years, numerous previous MOT certificates, a substantial number of receipts showing the car to have been very carefully maintained and considerable sums spent.

The car has remained with the second owner for the past 22 years and is reluctantly being offered for sale as a new project beckons.

A superb little car that is great fun and attracts enormous interest wherever she goes and is very rewarding and involving to drive.

Photographs and a video will be updated shortly.