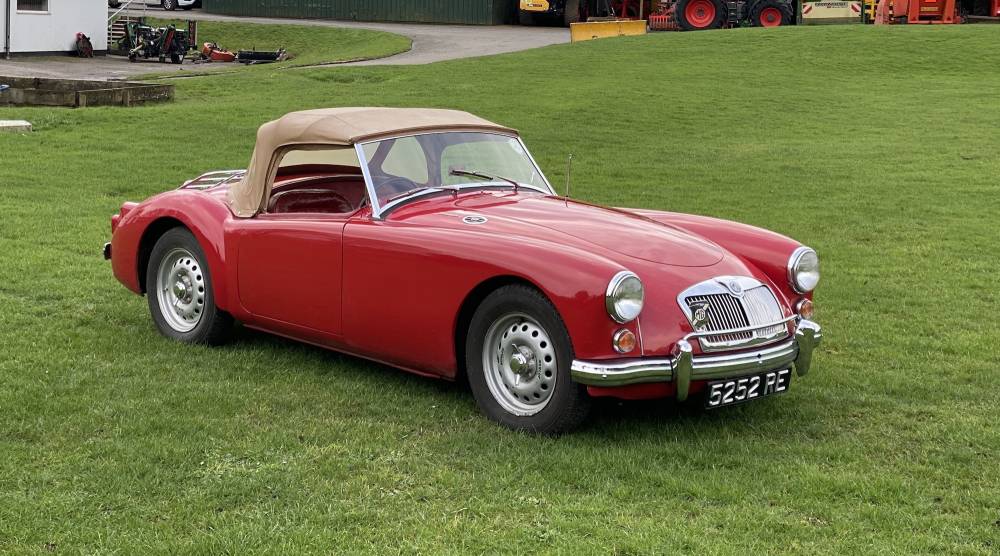 A high-performance version of the well-proven MGA, the Twin Cam was offered for just two seasons – 1958-60. Just 2111 were built in both Roadster and Coupe form, so the model has always had an air of exclusivity. Developed from the BMC ‘B’ Series engine as its basis, the Twin Cam power unit boasted 108 bhp, originally having a compression ratio of 9.9:1 (This was eventually lowered to 8.3:1).

A contemporary road test by ‘The Motor’ magazine showed the performance of the car to be outstanding for its engine size – a top speed of 113 mph being recorded, with acceleration from 0– 60 being accomplished in 9.1 seconds.

The most obvious distinguishing features compared to the standard MGA were the use of Dunlop ‘knock-off’ steel wheels, whilst Dunlop four wheel disc brakes ensured the performance could be rapidly checked.

The Twin Cam offered here is a home market right hand drive model and has been known to us for the past 27 years with both the previous and the present owner.  Fastidiously maintained over the years with substantial history, this is an exceptionally correct example of what is now a comparatively rare MG.

She was the subject of an extensive report featured in ‘Classic & Sports Car Magazine’ in September 1995 – a copy of which is included.  At the time of this feature the car had covered just 60,000 miles and now has only covered an additional 25,000 miles.  An engine overhaul was undertaken in 2006 and the car drives exactly as a good Twin Cam should.  With its free-revving engine and sure-footed handling, the Twin Cam is a joy for the enthusiastic driver.

According the MG Car Club’s Twin Cam Register, there are probably no more than around 110 roadworthy Twin Cams in the UK and the US.

Unlike so many examples, which have been over restored, this delightful car retains its original leather seats, which are in beautiful mellowed condition.

Two large files of history are supplied which include original buff log book, meticulously handwritten notes on maintenance, and bills dating back to the 1960s.  The hood is in excellent conditions and the side screens fit well and there is recently replaced red tonneau cover.

A rare opportunity to acquire a particularly original example of this sought-after model, with much history – certainly an MG for the connoisseur.

With the UK currently in total Lockdown we are closed for physical viewings.