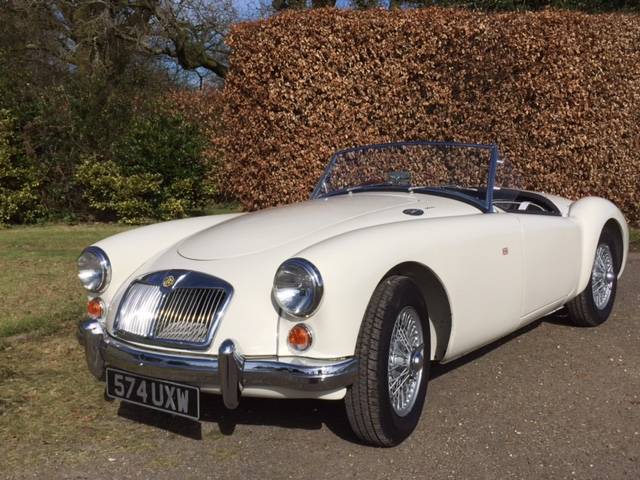 Introduced in 1955, as the replacement for the ‘TF’ Series, the all-new MGA was to prove an instant success. The curvaceous styling was very much of its time and the sure-footed handling was much praised. Produced until 1962, the MGA was available in both roadster and fixed head coupe versions.Superb example - 1500 miles since restoration to concours standard 4 years ago.

As with previous models, a very large percentage were exported, especially to North America, where it was very highly regarded.

A 1960 example of the 1600 Roadster, this car was imported around 11 years ago and acquired by the present owner during 2006. Whilst in the current owner’s care, a professional restoration to show standard was undertaken, being completed four years ago and only 1500 miles have been covered subsequently.

The car is of superb appearance, being finished in Old English White, with black leather trim. The weather equipment is all new and has not been used, as the car has only seen fine weather use.

Numerous bills are supplied in the document file, along with a Heritage Trust sheet, showing the car to have been despatched from the Abingdon Works on 19th August 1960, fitted with the optional wire wheels.

A splendid example of this much sought after MG, it is a joy to drive.