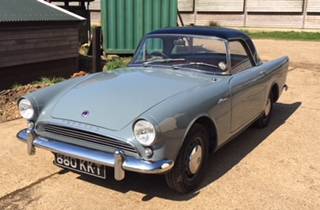 Launched in July 1959 in Cannes, following the end of that year's Alpine Rally, the new Sunbeam Alpine was rapidly embraced by the glamorous set of the time! Compared to other contemporary British sports cars, the Alpine had one great advantage - comfort! Boasting windup windows rather than the side screens more normally seen on sports cars, there was also lavish carpeting, heater as standard and comprehensive equipment.

The Alpine evolved through several series remaining in production until 1967.

The example offered here is undoubtedly one of the best of its type anywhere having apparently covered just over 36,000 miles from new. Supplied new in June 1960 to a Miss Suzanne Platt who was to keep the car for almost 40 years. Following this the car was kept in dry storage for many years. A substantial restoration costing huge sums was completed in the last 3 years and the car is presented in exceptional order throughout. The interior remains in extremely good original condition - testimony to the car lavished upon the car in its early days and the small mileage covered).

The car was the subject of a major centre spread feature in 'The Automobile' in March 2018 and for one seeking an example of this now comparatively rare model the car is certainly worth careful consideration.

Looking very much the 1960s style icon in the attractive colour scheme of Thistle Grey with red interior the car has the optional hard top, and a tonneau cover is also supplied. The soft top is also in very good order.

A rare opportunity the car has a substantial file of bills showing well over £25,000 to have been spent. Also included in the file is the original Buff log book showing the car to have been registered in Kent on the 23rd July 1960.