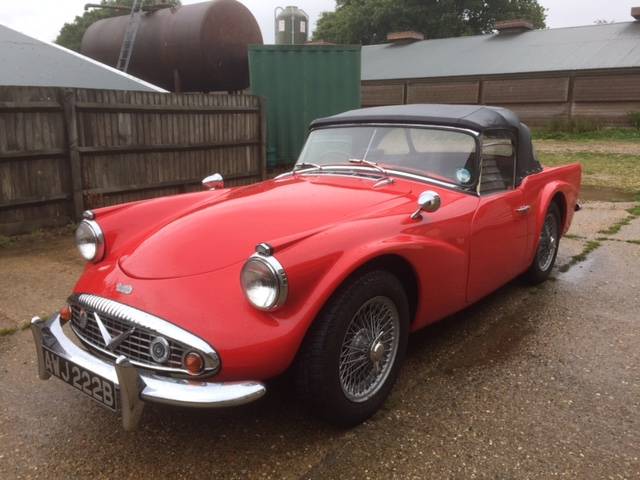 Making its debut in 1959, the Daimler SP250 represented a distinct departure for Daimler, being very different from their traditional offerings. This purposeful- looking glassfibre bodied sports car was also, interestingly, the last model to be launched by Daimler before its parent company, BSA, sold it to Jaguar Cars the following year. The SP250 boasted a top speed of 120 mph allied to rapid acceleration, with the result that a number were used by traffic police in Surrey, Manchester, Bristol and Liverpool. Following the opening of the first section of the M1 motorway in 1959, Bedfordshire Constabulary were to use the SP250 as a motorway patrol car - a role it filled with great effect.

This striking red example is one of the final 'C' Specification models, having been first registered on 4th April 1964.

In the current ownership for almost 19 years, this car has been the subject of ongoing and extensive work to bring it to the excellent standard it is in today. A vast amount of documentation charts the meticulous care this vehicle has benefited from and numerous handwritten notes make interesting reading. Much of the work has been carried out by a highly regarded marque specialist and bills are supplied.

The car has the benefit of overdrive which makes for comfortable and effortless long distance driving. The hood is virtually new and a tonneau cover is supplied, as is a hood cover. The 2.5 litre V8 engine has a delightful exhaust note and, in all, this is a very pleasant vehicle in all respects which is a credit to its fastidious long term owner.

There is also the original Driver's Handbook, a Heritage Sheet and a number of photographs included.