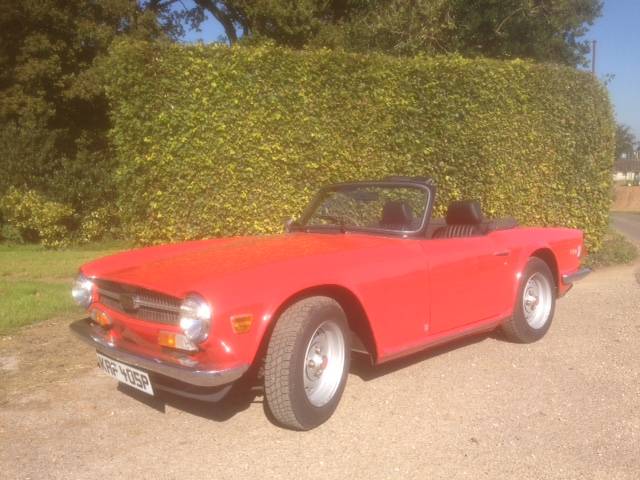 The most successful of the TR models, the TR6 was produced between 1968 – 76. Powered by a smooth 6 cylinder 2.5 litre engine, the TR6 was a formidable performer in its day, being capable of accelerating from 0 – 60 mph in just 8.2 seconds and having a top speed of 120 mph

Offered here is a very smart, 1975 example. Finished in Pimento red, it has been very well cared for and carefully maintained. Just recently a full service was carried out and four new tyres fitted and much additional work undertaken at a cost of £1500.

Interestingly, the previous owner had originally bought the car back in 1988 and much restoration was carried out subsequently.

At that point the recorded mileage was just 35,884 and believed correct. The mileage showing now stands at just over 54,000 and is believed to be correct, checking back on previous MOT certificates.

The double duck hood has recently been renewed  and the seats are also recent replacements.

The car presents and drives extremely well and feels very tight and together, with virtually none of the rattles so frequently found on these cars.

Numerous bills are supplied on file along with previous V5 documents, MOTs etc.